Baseball fans, more than any other sports fans, revere their history. The legends and stars of the past are ever present in the games we watch today and their relative merits are constantly debated – especially regarding the Hall of Fame. For example, Barry Bonds surpassed Henry Aaron who surpassed Babe Ruth, Cal Ripken surpassed Lou Gehrig, Pete Rose surpassed Ty Cobb. During the 2021 World Series, the spirit of Henry Aaron is frequently evoked.

Baseball statistics have always been the scaffolding upon which we hang our narratives, yet the traditional statistical yardsticks – a .300 average, 300 wins, 3000 hits, 500 HR, no longer seem up to the task as baseball evolves new strategies and practices. We need a more robust metric that considers the continuing evolution from small ball to "three true outcomes," the specialization of pitching roles, and other profound changes in the game. Wins Above Replacement (WAR) goes part of the way toward this end. Career Value Index (CVI) represents a next step. No statistic is a substitute for interpretation and judgment, but CVI supplements our subjective impressions by providing an objective starting point for discussion of which players' accomplishments warrant recognition in the Hall of Fame (HOF).

CVI is a WAR-based metric, introduced in Baseball Generations, that quantifies the value of a player's career for the purpose of considering that player's qualifications for the HOF. The Baseball-Reference.com version of WAR is used. Like WAR:

A CVI of 60 (like 60 WAR) is a rough threshold separating Hall of Fame contenders from pretenders.

First, CVI gives extra credit for every season in which a player's WAR exceeds a threshold(typically 5.0) corresponding to an all-star performance level. Just adding up a player's career WAR tends to overvalue "compilers," who are just pretty good for a very long time, and to undervalue players who were among the very best players in baseball over a short time but lacked longevity.For example:

A comparison of compiler Don Sutton (1966-1988) and superstar Sandy Koufax (1955-1966) is even more striking. Sutton was a very good pitcher who averaged approximately 3 WAR per year over 23 years, never exceeding 6.6 and exceeding 5.0 only 3 times. By contrast, Koufax pitched at a high level for only six years (1961-1966) but was widely viewed as the best pitcher in baseball during the last four years, in which he amassed 35.4 pitching WAR and won an MVP and three Cy Young awards. Sutton never came close to winning either ward. Yet career WAR would have us believe that Sutton (66.7 WAR) was better than Koufax (48.9 WAR). CVI provides a truer comparison, ranking Koufax (70.2) over Sutton (58.7). While Koufax's 70.2 CVI in his abbreviated does not fully reflect his dominance in his prime, it does do abetter job than career WAR of reflecting how we and HOF voters subjectively view his career.

The second major improvement is that CVI considers historic differences in the number of games played and how pitchers were used. In the early days of MLB, when teams played only 2-3 games per week, teams typically carried only one full-time pitcher who started nearly every game. As the schedule intensified, it was still not uncommon for pitchers to amass over 600 IP and to accrue 15 or more WAR in a single season. For example, Hall of Famer Tim Keefe posted 19.9 WAR in 619 IP in 1883. Walter Johnson never pitched 400 innings in a season or accrued more than 15.1 pitching WAR. Even Cy Young himself topped out at 453 IP in 1892 and never pitched more than 400 innings after 1896. For modern-day pitchers, Pedro Martinez's 11.7 pitching WAR in 217 IP in 2000 is about as good as it gets.

CVI levels the playing field by adjusting the threshold for awarding extra points. Instead of awarding extra points for WAR > 5.0, Keefe and other pitchers in 1883 received extra points for WAR > 11.0. So, Keefe's CVI in 1883 was 30.2. That's still outstanding, but not the 39.8 it would have been with the standard 5.0 threshold. Pedro Martinez's 11.7-WAR 2000 season (when the threshold was 4.5) earned a 20.9 CVI. Unfortunately, the human arm is not meant to throw 600+ IP per season and the insane workloads on pre-Cy Young pitchers took their toll on career longevity. So Martinez, who was not the most durable of modern pitchers, still wound up with a 118.2 CVI versus 88.5 for Keefe. Again, the CVI for these two pitchers better reflect how we and BBWAA voters view them than their respective career WAR -- 83.9 for Martinez versus 86.9 for Keefe.

CVI also contains several minor adjustments to career WAR – adjusting for WAR's undervaluing of catchers, relievers, designated hitters, and 19th century hitters (who played shorter schedules), interpolating lost seasons due to wartime military service and racial discrimination, and devaluing WAR values (by 20% for hitters and 10% for pitchers) for seasons in which players were known to have used illegal anabolic steroids. Details are provided in Baseball Generations.

The top 100 position players in CVI, updated through the 2021 season, are tabulated below. Hall of Famers are shown in boldface type. 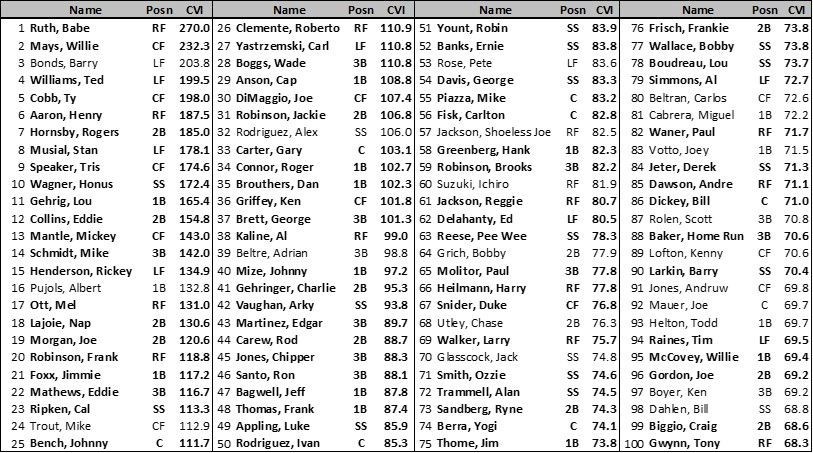 The top 60 pitchers in CVI, updated through the 2021 season, are tabulated below. Hall of Famers are shown in boldface type. 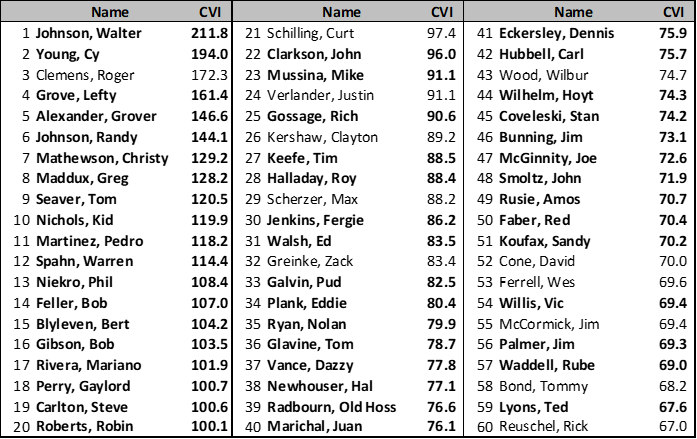 Skipping past Clemens (PED) and Schilling (controversial pronuncements), one has to scan down to Wilbur Wood (#43) to find an eligible player who has who has been passed over for the HOF based on performance alone. Cone (#52), Ferrell (#53), McCormick (#55), Bond (#58), and Reuschel (#60) are other eligible players who have not yet been elected on their merit. Clemens and Schilling are still on the BBWAA ballot.

Other Active and Recently Retired Players with CVI > 60: CC Sabathia 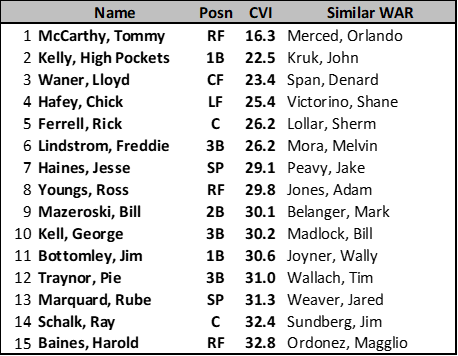 The 15 Least Qualified Players in the HOF According to CVI

For each player, a non-Hall of Famer with similar or higher WAR has been selected for comparison. Traynor was the only listed player elected by the BBWAA. Six of the players listed (Kelly, Waner, Hafey, Haines, Youngs, and Marquard) were connected with Frankie Frisch and were selected during his tenure on the Veterans Committee.

Four Veterans Committee Players for the Hall of Fame

Nice job on this David. Do you have an expanded list? Wondering about players like Mattingly and Gil Hodges?