TONY CONIGLIARO: “Tony, We Hardly Knew You” Part I 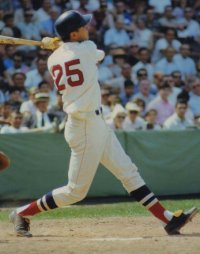 In June of 1962, Tony Conigliaro of Swampscott, MA, starred for St. Mary’s High School of Lynn. By April of 1964, the 19-year-old Conigliaro was a starting outfielder for the Boston Red Sox.

In his first at-bat at Fenway Park, Tony Conigliaro hit the first pitch thrown to him for a home run. In his rookie year he belted 24 roundtrippers to set a major league record for home runs by a teenager. In 1965 he hit 32 homers to lead the American League, making him the youngest player to ever lead the league in home runs. In June of 1967 he hit his 100th major league home run. At age 22 years, 6 months and 16 days, he was the youngest player in the history of the American League to reach that level.

But Tony Conigliaro was more than a home run hitter and more than raw statistics. Tony C. was a local hero. He was one of us.

“I thought he was the best young hitter I had seen in a long time. He reminded me a bit of Ted Williams when Ted was a teenager. They were both tall and lean” Johnny recalled. “And you could see right away that Tony worked as hard on his hitting as Ted used to.

“He had played only a short season in the minors but you knew right away that he was going to be a good one. Of course his parents, Sal and Teresa, lived around the corner from our home in Swampscott [MA], so I knew I was getting a good kid.”

When Ted Williams was a teenager playing in the Pacific Coast League, legendary hitter Lefty O’Doul, who had lifetime major league batting average of .349, watched the young phenom taking batting practice. O’Doul told Williams, “Whatever you do kid, don’t let anyone change that swing.” After Williams watched Conigliaro hit in spring training in 1964, Ted’s only advice to Tony was, “Don’t change a thing.”

Although the 19-year-old Conigliaro was a long shot to make the big league club, Pesky gave him plenty of playing time. Tony made the most of his opportunity, playing well in the outfield and hitting big league pitching with power.

“I remember one home run he hit,” Pesky reminisced. “It cleared a fence in centerfield that was probably 450 feet from home plate. One of the writers went out to measure it and figured it had traveled about 530 feet.

“But I had to fight to bring him to Boston with the big league club. They wanted to send him to the minors for more seasoning, but I wanted him in my outfield.”

When the writers asked Pesky if Tony had made the team he responded, “Do you want me to be shot by the fans back home? Yes, Tony will be in there.”

To get to Fenway Park from Tony Conigliaro’s birthplace of Revere, MA, you take the MBTA’s Blue Line to Government Center in downtown Boston and then change for the Green Line. But Tony’s journey to Fenway involved thousands of hours on the baseball fields of Boston’s North Shore.

Tony often recalled his early days on the baseball diamond near his home in East Boston. “I’d get up every day, put on my sneakers, asked my mother to tie the laces for me, and run out the door to the ball field across the street from my house. That’s all I wanted to do. I was there so much that the other mothers in the neighborhood began saying my mother wasn’t a very good one because she let me stay out there all that time.”

Tony’s younger brother Billy spent three seasons with the Boston Red Sox, two of them playing in the same outfield with his big brother. “I don’t know if people realize how hard Tony worked to get to the big leagues and how hard he worked to stay there. He would spend hours swinging a lead bat or squeezing a ball.”

Richie Conigliaro is the youngest of the three brothers. “I remember pitching to Tony in the parking lot of Suffolk Downs Race Track. When we moved to East Boston from Revere our house was right above the track. Tony hit a line drive back at me and it caught me right in the forehead. I went down for the count!”

The local legend of Tony C. began in the East Boston Little League where he excelled. Tony always singled out his coach Ben Campbell for praise. “Every kid in the world should have a little league coach like Mr. Campbell,” Tony insisted. “I think that the course that I followed all through baseball was started right there under Mr. Campbell.”

Tony’s excellence on the baseball diamond continued as he moved from Little League to Pony League ball. “Tony stood out at every level,” his brother Billy remembered.

Tony was a three-sport star at St. Mary’s High School in Lynn. Tony and his father Sal drove from their Swampscott, MA, home to school every day. Sal would finish work at the nearby Triangle Tool and Dye Company and pick Tony up from practice for whatever sport was in season.
Baseball scouts first took notice of Tony in his sophomore year. They had turned out in droves to scout pitcher Danny Murphy of St. John’s Prep in Danvers, who eventually signed with the Chicago Cubs for a six-figure bonus. Murphy only gave up four hits to St. Mary’s of Lynn that day and three of them were to Tony Conigliaro.

In addition to his baseball prowess, Tony excelled at basketball and football. On the basketball court he set the St. Mary’s school’s scoring record with 417 points in his senior year. And on Thanksgiving he led the football team to victory over their larger Lynn public high school rival.

In his junior and senior years at St. Mary’s Tony hit over .600 and pitched his team to 16 victories. Following his graduation from St. Mary’s of Lynn, Tony played in the Hearst All-Star game in New York City, tracing the footsteps of such Red Sox luminaries as Harry Agganis, and his future teammates Billy Monbouquette and Gary Bell. After his American Legion baseball season ended in September 1962, Tony signed with the Red Sox for a bonus of $20,000.

His first stop was Bradenton, Florida, for winter ball. At Bradenton Tony learned how hard he was going to have to work to make it to the major leagues. He also established a lasting friendship with catcher Mike Ryan of Haverhill, Massachusetts. Conigliaro and Ryan both made it to the Red Sox in 1964 and continued as teammates through the Impossible Dream season of 1967.

Tony spent the 1963 season in Wellsville, New York, playing for the Red Sox farm club in the New York-Penn League. Future Red Sox teammates in Wellsville included George Scott and Joe Foy. His .363 batting average and 24 home runs earned him an invitation to the Red Sox spring training camp in Scottsdale, Arizona, in 1964.

Tweet
The Anguished Joy of Sparky Lyle
Memories and Dreams